There are many islands in this map – some with resources connected by roads and bridges. Many of areas can therefore……

A large volcanic river separates the battlefield into two halves. Access is only possible via the road system around the edges. The player must……

The player starts with a limited number of robots. This is a simple map with limited territories and resources. Jeeps are the main influence……

Sending an additional unit into a combat will enhance your chances of winning. E.g. sending even just a unit of Grunts in with a medium tank to attack an opposition medium tank will draw his fire or even confuse your opponent and will increase you chance of victory considerably.
When you use multiple units as described……

Rushing across the map to capture territories: Capturing territories in the computers half of the battlefield at the beginning of the game may give the player the initial advantage, but this is unlikely to be a winning strategy as the players units will be spread to thinly over the battlefield.
Sending units into attack without……

In Z the computer player does not play a pre-set strategy but reacts in real-time to the decisions that the player makes. Therefore it is not possible to define a sequence of orders for each level which will guarantee winning a battle. However there is a basic strategy that should be employed which will……

This Commander Zod Single Player Guide was written by the Bitmap Brothers in September 1996. It is the original text but still valid of course even for the recently re-released versions of the game for Android and Windows. You are still playing the same game, still facing…… 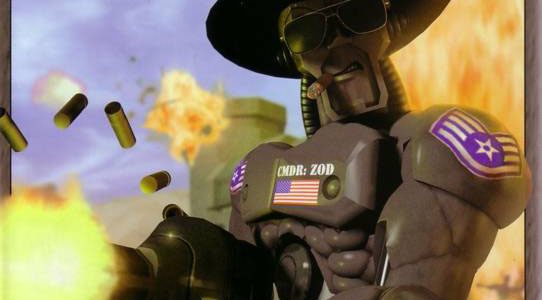 What the hell is Z? That’s right, there is really not much to associate with that letter. But then, in 1996 the Bitmap Brothers from the UK came out with this amazing real-time strategy game in which a “Commander Zod” plays a main (mean) role.