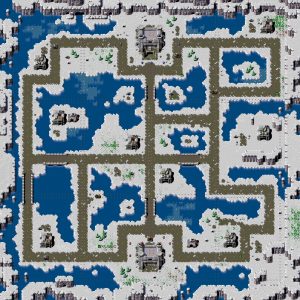 There are many islands in this map – some with resources connected by roads and bridges. Many of areas can therefore only be reached by robots. This makes it important that the player retains control of the robot factories.

Send a unit of robots to collect the gun, the jeep and the central territory in front of your fort (Point 1).

Move your medium tank into the central area and use it to defend the area.

Pick up the light tank (bottom left) (Point 2) and bring it up to defend the two bridges in the centre left territory. You may be able to pick off CPU robots as they are produced by the island factory to the north of these bridges (Point 3).

Send a unit of robots to capture the bottom right territory (Point 4) and defend it strongly as the CPU often attacks along this road.

Don’t try to take the right hand territory (Point 5) too early as the CPU tends to defend it with his medium tank. 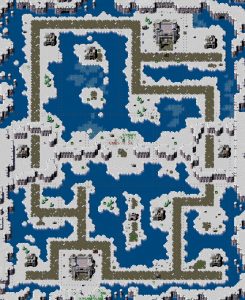 The main playfield is covered with water. There is a central wall dividing the map which must be broken down to give access to the robot factories on the left and right Control of the centre of the wall is vital to establish a territorial advantage.

You should aim to take the central territory (Point 1) plus one of the two either side of it. Taking all three will spread your forces too thinly – if you succeed at all.

Destroy the rocks between your chosen side territory and the centre to allow units to move easily between them.

Watch out for raiding robots taking the territory to the right of your fort (Point 2).

Make robots (perticularly Snipers) in your fort and use these to defend the central flag (Point 1). 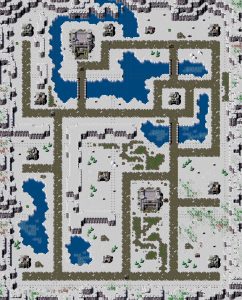 The CPU’s fort is on an island surrounded by water with heavy gun defences. There are two access points but one is a bridge which if destroyed limits your options. The players fort is on open ground, and is therefore vulnerable to attack from all sides.

Move your Tough robots into the APC to the southeast of the fort (Point 1).

Move your medium tank up to take and (hopefully) hold the island territory above your fort (Point 2).

Move robots down to the bottom left territory (Point 3) (picking up the tank as they go) then bring them up the left hand road. Your Tough/APC combination can be used either to reinforce the tank defending the island territory or be placed to the left of your fort to counteract CPU attacks on the left hand side.

Building APCs in your fort and tough robots in the factory to the right is quicker than building medium tanks and is almost as effective.

Always leave at least one unit defending your fort against CPU attack from the right hand side. 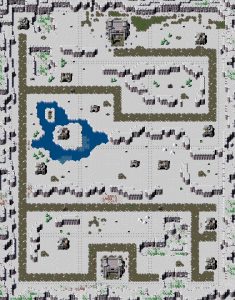 The player and the CPU are separated by multiple horizontal lines of rocks. The road route is circuitous and slow. Vital to success in this level is control of the central open area.

As well as taking the territories to the left and right of your fort you must grab the hardware on the road (Points 1 & 2) as quickly as possible and move them up to capture the next row of territories.

Watch the CPU closely and move your forces to intercept his attacks. Look out particularly for where h sends his medium tanks.

If possible, try to destroy the CPU tank factory on the right (Point 3) by blasting through the rocks below it.

Don’t be tempted to make powerful, expensive units too early as they take too long to manufacture.