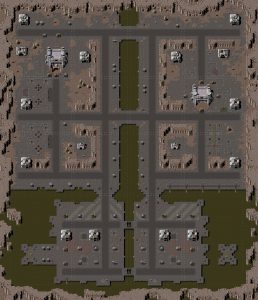 A river runs from north to south, splitting the map into two halves. On a large island to the south lies a very large car park. This contains lots of valuable hardware (mobile missile launchers, tanks etc.). The player starts the level with very few robots and so is, initially, unable to capture all the hardware. The player needs to get control of the two robot factories the bottom of the map as soon as possible in order to manufacture robots to occupy the hardware. Once captured, the hardware must be moved north to defend against CPU attacks in the centre of the map.

Use your fast moving units (jeep, Snipers) to get down to the car park and capture some hardware.

Get all your robot factories going. Don’t wait for lasers – get something built and get them to the car park ASAP. This is a race against time.

Use your tanks to defend the two routes across the central river (Points 1 & 2). When you have captured the heavy tank and mobile missile launcher in the car park, bring them up to reinforce these two points and then to drive across onto the CPU side of the map.

Do not leave the bridges in the car park undefended. Watch out for raiding robots stealing the hardware on your side of the map.

Once all vehicles in the Car Park have been occupied, build Toughs in the southern robot factories to put into the APCs. 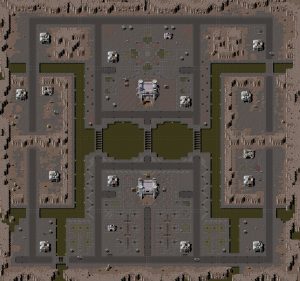 The forts are relatively close together, connected by 3 (initially destroyed) bridges. To the left and right are large enclosed areas containing 5* factories and heavy unmanned hardware. Both forts are vulnerable from attack in all directions. Beware of the CPU sending robots across the river and vehicles across the bridges to attack your fort.

Use the crane (bottom left) to repair the bridge in that territory (Point 3) and then bring it back to your fort for later.

Build powerful units and reinforce your forces either side until you can make an assault. A few guerrilla operations in the centre will draw some of his forces back to defend his fort. 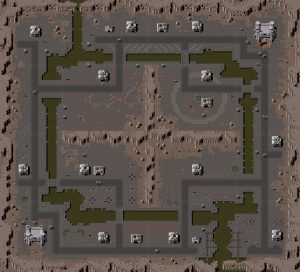 Position your medium tanks at the road junction below the top left territory (Point 2) to repel CPU heavy tank assaults.

Send troops along the bottom to pick up the light tank and use your heavy tank to defend the 3* tank factory territory flag (Point 3).

Send heavy tank into the bottom right central territory (Point 5) with support from the left and try to hold the 5* tank factory there whilst a powerful unit is built. Alternatively, try to take the other 5* tank factory (top left centre) (Point 6).

Once established you can try the following: 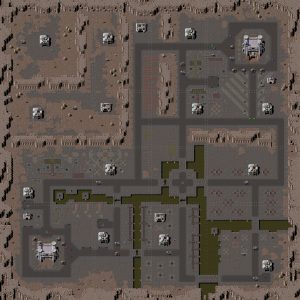 Being the last level of game, everything is thrown at the player. The initial layout is unusual in that many of the buildings are close to the CPU and HCP forts. The player must capture as many territories as possible to make these factories effective. It is crucial that the player captures the Mobile Missile Launcher and Heavy Tank in either the top left or bottom right of the map in order to have any chance of winning.

Drive hard up the left hand side of the map, blasting through the rocks to capture these territories and the uncaptured heavy tank (Point 1) and mobile missile launcher (Point 2). Move the Tank and Mobile Launcher across to defend the road to the right.

Move robots swiftly into the two territories to the right of your fort, using the crane to repair the two bridges closest to your fort (Points 3 & 4).

Use a tank to destroy the bridge in the bottom right corner so that the CPU heavy tank has to take a long route round (Point 5).

The CPU concentrates attacks in the area to the north of (3) so it is important to establish a strong defence at this location. Try to prevent the bridge onto the small island from being repaired or destroy it as CPU tanks come across (Point 6).