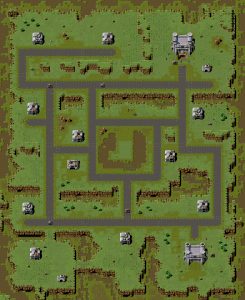 The introduction of chasms means there are areas of the map which cannot be crossed by any unit. Both CPU forts are on the right of the map. The chasms are crossed by roads in several places but are not bridged so the key to success in this level is division of resources between the various access routes.

Use your medium tank to move up the right hand side of the map and blast through the rocks below the CPU howitzer (Point 1). His first shot will hit the rocks most of the time and you can then destroy him and take the territory.

Use Lasers or Snipers to take the central island territory (Point 2) and defend them with your heavy tank from the road below.

Defend the flag controlling the 3* tank factory (Point 3) on the left heavily. Place your tank to the right of the road and use the repair facility to repair it in between battles.

Make Lasers or Snipers straight away in the central 5* robot factory. 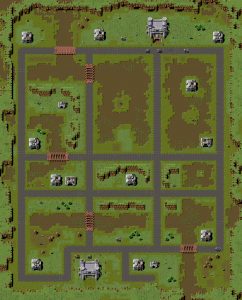 This level sees the first introduction of the crane. Many of the bridges are destroyed, closing down access to various parts of the map. This restricts vehicle movement and therefore it is important to repair these bridges at the beginning of the game to give free movement to your units.

Capture cranes and repair the bridges in front of your fort and in the bottom right (Point 1) as quickly as possible.

Destroy the CPU heavy tank by attacking it through the rocks surrounding your factory in the centre of the map (Point 2).

Capture the gun on the right and destroy the nearby rocks so that it can be used to defend the road.

Move your forces to “scare” the CPU into retreating as he moves units down the long roads in the centre and on the right of the map.

Park a tank by the repair facility on the left and use it to defend the flag in this territory (Point 3).

Send Toughs or a tank to destroy the CPU owned 3* vehicle factory on the left. 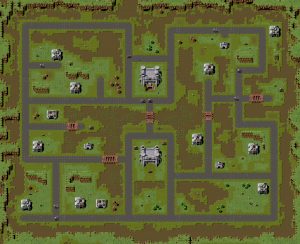 The forts are very close together but the bridge between the two is destroyed. Players should take control of either the left or right of the map. The player should maintain a good defence in front of the fort as the CPU will repair the connecting bridge and launch a direct attack across the river.

Right at the beginning of this level, pick off any CPU units which come close to the water’s edge using your heavy tank (Point 1).

Take the island territory flag to the right and below your fort. Move the robots to the right to capture the adjacent territory. Then move the remaining robots back to defend the island.

Capture the territories in the bottom left of the map (Point 2) and bring the crane back to repair the bridge to the left of your fort (Point 3).

Use robots to sneak up and capture the two flags to the right of the CPU fort (Points 4 & 5). 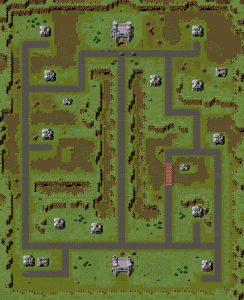 There is a heavily defended direct road between the forts. Access is possible, although difficult, up either side of map. Player must remove defences on the roads whichever route is chosen. The CPU often launches a direct assault down the central road with a Heavy tank and it is vital to eliminate this unit as soon as possible.

Move your heavy tank up to take the territory in front of your fort and to deter the CPU from pressing an attack down the central road (Point 1).

After taking your “home” territories try to take the territory on the right which contains the 5* robot factory (point 2).

Use snipers / lasers to take out the Gatling gun protecting the flag on the island on the left (Point 3).