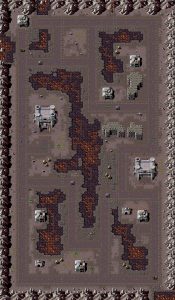 A large volcanic river separates the battlefield into two halves. Access is only possible via the road system around the edges. The player must defend one route and attack on the other.

Capture the light tanks North and South of your fort.Get a Light Tank to the defend the top centre (Point 1). Send the other tank and a unit of robots to the bottom centre (Point 2) as quickly as possible. The robot factory at the bottom is very important as it can make Tough robots.

Poach the central territory (Point 3) if the CPU moves his defences away. Even if this is only temporary, your buildings will work faster for that time.

The CPU often leaves the territory south of his fort (Point 4) poorly defended and this provides a good extra territory to grab. 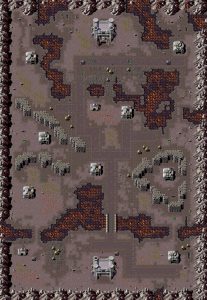 There are three routes from both the CPU and HCP forts which can be used to launch alternative attacks. This is the first level where a 2* vehicle factory is available to produce a medium tank.

Move your light tank and Tough robots straight up to take the territory above your fort (Point 1) Blow your way through the rocks on the right (Point 2) using the grenades to get your tank factory working.

Capture the light tank on the left and then send it with the remaining robots up to the second row left hand territory (Point 3) and then hold on. It is dangerous to push on to try to take the CPU’s 2* tank factory too early. 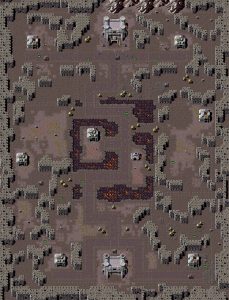 A central road runs between the two forts. On either side is a maze of rock formations. In the gaps in these rocks are pieces of uncaptured hardware as well as a factories on either side. The central road gives access to the 4* factory in the centre. Other routes from the sides onto the road exist but are in some cases blocked by rocks which can be destroyed.

Blast your way through towards the flag in the centre left territory (Point 1) and pick up the uncaptured light tank.

You can use your Medium tank to effectively defend the road just below the central territory.

Take your tough robots through the rocks to the right and then use the land bridges (Point 2) from the right hand side into the centre to capture the radar station territory.

Be careful not to spread your resources too thinly. Take either the left or right hand side of the map in addition to attacking up the central road. 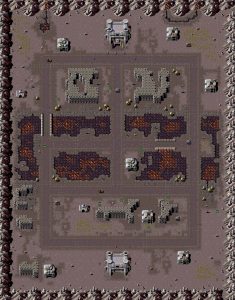 Quite a number of unmanned pieces of hardware are scattered around the map. The player must capture as much of this before the CPU. It is important to capture and maintain possession of the central territory with the 2* tank factory. The destruction of bridges in this level will lock out the CPU from certain areas of the map.

Try to get to the central territory first and capture the Gun which can defend both the flag and the bridge below it (Point 1). This can be used to destroy the bridge if necessary to prevent the CPU moving into the centre.

Build up a large force in the centre and use snipers to get past the gun defences south of the CPU fort (Point 3) and the guns on the fort itself. Alternatively, bombard the CPU fort with artillery and tough robots.