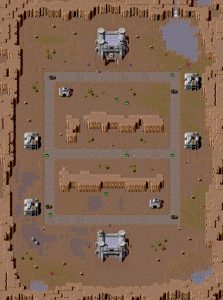 The player starts with a limited number of robots. This is a simple map with limited territories and resources. Jeeps are the main influence in this level and controlling these will greatly increase your chances of winning.

Capture the jeeps and group your units together to make assaults up both sides of the map. Do not allow jeeps to become separated from their accompanying robot units – if this happens, your drivers may be shot and blue robots will steal them.

Take the robot unit in front of your fort straight up towards the central territory flag – they will pick up the grenades and blast their way through the wall automatically. By outnumbering the CCP jeeps it should be easy to shoot the drivers out and capture them for yourself.

When you reach the top of the map, position your group south of the road (Point 1) directly below the CCP fort entrance. Rush the entrance with all your units – The Gatling Gun will not be able to pick them all off.

Alternatively, use two or more groups to take out the Gatling gun using a pincer movement. 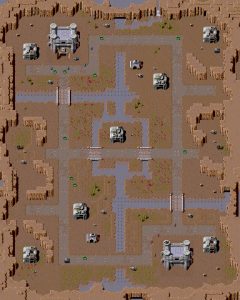 This level sees the first introduction of the light tank and Gatling gun. The player will learn how to use grenades and tanks to clear rocks to flags and resources. The technique of using robots to move across water is introduced.

Use single orders to save time – Send a robot unit to capture the flag (Point 1). They will pick up the grenades and get into the tank automatically.

Similarly, send a robot unit to get into the Gatling gun behind the rocks on the right (Point 2). They will collect the grenades and capture the jeep automatically.

Send a unit diagonally towards the Gatling Gun by the flag controlling the 1* Tank factory (Point 3). Set up the factory to produce a light tank and then send the remainder of the robot unit on to the central territory (Point 4) where they can join forces with the jeep from the right to attack the CPU forces defending the vehicle factory. 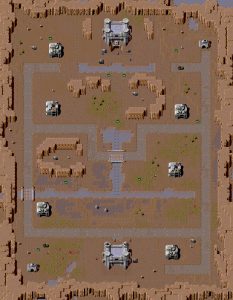 The CPU fort is protected by water in front and by rocks to either side. The territory flags are not close to buildings, encouraging player to destroy buildings rather than trying to recapture them.

Provide plenty of protection for the flag controlling your left hand vehicle factory (inside the rock circle on the left) (Point 1).

Try to poach his two star robot factory just before the units are manufactured (Point 2).

Watch out for light tank raids down the right hand side of the map as the Gatling Gun defending the bottom right territory will offer little resistance.

Build Psychos straight away in your 2* robot factory. Use these robots to take out the Gatling gun defences inside the rocks below the CPU fort (Point 3).

You can slow down the CPU’s production of vehicles in the factory (Point 4) by using grenades against it. 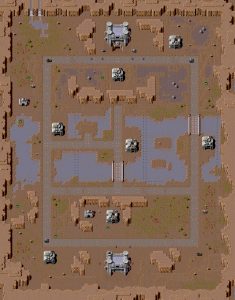 This level is mainly robot based. There is an important territory in the centre of map, with a 2* robot factory. One of the tank factories (centre right territory) can only be captured by robots as the territory flag is on an island.

Capture the light tank on the left and move it up to take the flag controlling the tank factory and to defend the road junction (Point 1). From here it can be easily moved into the centre if required.

Make sure you give the Gatling gun on the right (Point 3) some support rather than leaving it on its own to defend that side of the map – The CPU often mounts its main attack on the right if you control the centre.